I am pretty sure that I posted this picture of my pastel already, but “artists” need to self-promote.  Otherwise, not much happens on its own.  That’s the way of the art world.

(I will get to my next long walk in a minute, but first I need to plug my ArtPrize piece again.)

My venue at ArtPrize is right downtown in Grand Rapids, in the reception area of the Holiday Inn Downtown Grand Rapids.  You can visit my page on the ArtPrize site:  http://www.artprize.org/67362

If you get to ArtPrize, from September 19 to October 7, you can vote for artwork.  Since you will likely not see anything better than my piece, you might as well vote for me (Vote Code: 67362).  My brother-in-law Joe will have a large outdoor metal sculpture in front of the Courtyard Marriott not far from me.  (Okay, okay…  He will also be a worthy alternative for your vote.)  But, you have to be in Grand Rapids to vote.  The voter registration system there actually picks up on your presence in Grand Rapids, in order to validate your voting rights.  The public voting prize is $250,000, and I can use the cash, so bring friends – actually, bring lots of friends!

Another chapter of my art summer was helping my sister Jennifer with her glass and metal work tent at the Ann Arbor Art Fair.  Man, that was a tough four days!  We sold well, but the behind the scenes work was intense, especially set-up and tear-down.  And, that comes after making all of the product in the first place! (I wasn’t involved in that.)

My buddy Tim came to the Art Fair and we took a walk about.  I was staying at his house during the fair.  It is, I think, one of the largest art fairs in the country, maybe even the largest.  It is always nice to be in Ann Arbor.  I lived several years there and have two degrees from the University of Michigan.  There is a plaque on the Modern Language Building commemorating my contributions to German literature made during my studies there.  Disappointingly, I couldn’t locate it.

The video above was made at the Ann Arbor Art Fair.  It is on my YouTube Channel, which now has 2 videos and 2 subscribers and about 18 or 20 views (views of my first video posting)!  I am well on my way to YouTube celebrity, fame and fortune.  Actually, this video here is not really such a successful video posting. My next challenge really is to figure out “vlogging”  (=video+blogging), which will really be a game-changer for my blog.  Can’t wait!  But, meanwhile, enjoy a little Ann Arbor street jazz in my humble early attempt at going multi-media with my blog.  You will also not want to miss Tim’s cameo appearance toward the end.

Okay, now a word about my next long walk:  I have received feedback on my walking plans from my subscribers, who are still actually following this blog.  The main message back to me is that I should do the Spanish part of the Camino de Santiago, the part that takes you to the end of the pilgrimage 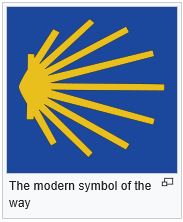 to the shrine of the apostle Saint James in the cathedral of Santiago de Compostela.  The big argument in favor of doing the end of the pilgrimage is that you can earn your pilgrim’s merit badge for making it.  The part through Switzerland and other earlier stretches of the pilgrimage don’t get you the recognition, the compostela, i.e. the certificate of accomplishment given to pilgrims on completing “the Way.”  I really have to get that compostela certificate.  I have also been told that the first part of the walk in the Pyrenees has a lot of snow, which may force the start date of the walk to be later than I intended, so I don’t get hit by an avalanche.

Consulting Wikipedia, I learned that one of the great proponents of the St. James pilgrimage in the 12th century was Pope Callixtus II, who started the Compostelan Holy Years. The official pilgrimage guide in those times was the Codex Calixtinus. Published around 1140, the 5th book of the Codex is still considered the definitive source for many modern guidebooks.

So, here is a excerpt from the Codex Calistinus:

“The pilgrim route is a very good thing, but it is narrow. For the road which leads us to life is narrow; on the other hand, the road which leads to death is broad and spacious. The pilgrim route is for those who are good: it is the lack of vices, the thwarting of the body, the increase of virtues, pardon for sins, sorrow for the penitent, the road of the righteous, love of the saints, faith in the resurrection and the reward of the blessed, a separation from hell, the protection of the heavens. It takes us away from luscious foods, it makes gluttonous fatness vanish, it restrains voluptuousness, constrains the appetites of the flesh which attack the fortress of the soul, cleanses the spirit, leads us to contemplation, humbles the haughty, raises up the lowly, loves poverty. It hates the reproach of those fuelled by greed. It loves, on the other hand, the person who gives to the poor. It rewards those who live simply and do good works; And, on the other hand, it does not pluck those who are stingy and wicked from the claws of sin.”

Yikes, that is all a bit scary!

I will write another post soon.  I have some summer and fall plans that may give me some interesting topics and photos, I hope.  Maybe a Long Walk can be more than just a long walk.  I hope so, because there is still some time before I can start the Camino de Santiago.

International banker, now turned painter, collector, blogger and hiker. Also, in the last few years, a leukemia survivor, which has been a life-changer for me in more ways than one! Follow my blog at a-long-walk.com. View all posts by Jeff

2 thoughts on “Pre-Walk – Summer of Art”

This site uses Akismet to reduce spam. Learn how your comment data is processed.

About A Long Walk